Book Report: Plan B (and its extreme timeliness)

Well, hello there on a Sunday!  My designated day of the week to post is Tuesday, and more often than not I'm dragging myself kicking and screaming to the computer, either feeling like I have nothing to say or that I have so much to say that there's no way I could even start.

After a week like this, well...it's definitely the latter.

Other blogging challenges for me lately have been political.  I make no secret that I'm a liberal (also, I'm a yoga teacher living in New York City - it doesn't take a genius to figure that one out) but in the past I usually tried to avoid anything too political on this blog.  I have plenty of conservative family and friends who I love and I don't like the idea of alienating anyone.

What's happening now in our country, though, is way beyond politics.  It's not about liberal or conservative, it's about decency and respect for the truth, about keeping with our core American values.

Again, as a yogi it should shock no one that I gravitated toward the calm, measured, thoughtful, educated candidate who practices meditation as opposed to the one who can't name a particular group of people without putting the othering "the" in front of them (i.e. "the" blacks, "the" gays, "the" Mexicans), and who has said, "Show me someone without an ego, and I'll show you a loser."

Even her slogan of "Stronger Together" is all about the true essence of what yoga is - connection, yoking together, all things being one.  Hell, it's our country's national motto - e pluribus unum.  Out of many, one.  So I strive to be inclusive rather than divisive, and at the same time feel a profound patriotic duty not to remain silent when the stakes are this high.

So where does this book come in? 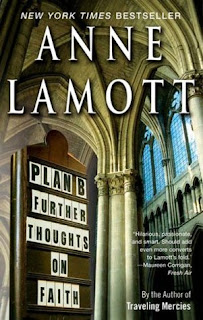 In our fearless leader's absence, the fabulous ladies' book club I've been a part of for years has been left in my care.  At my friend Laura's insistence, and given the struggles we have to look forward to, I chose for our next book Traveling Mercies, by Anne Lamott.  It's a memoir about her improbable conversion to Christianity after being raised by fiercely atheist/agnostic parents and friends in California during the 60's and 70's.  I'm not a Christian, but Laura and Lisa (aforementioned fearless leader of our club) are, and I always love talking faith and spirituality with them.  They always inspire me.

In anticipation of loving Lamott (I already loved her memoir on writing, Bird by Bird) I stocked up on her stuff before heading to Costa Rica.  I wound up leaving Traveling Mercies with my wonderful mother-in-law, as it's right up her alley.  She is also a devout Christian, and while she doesn't share Lamott's poltiics (or mine, for that matter), she also grew up in California around the same time and found a lot to relate to.

So after devouring Traveling Mercies, I moved right along to Plan B: Further Thoughts on Faith.  It was written years after Traveling Mercies in the early throes of the Bush administration's tragic decision to go to war in Iraq.  It was so striking to find Lamott having such similar anxieties and feelings of writhing, angry powerlessness as I feel now.  It felt comforting to know she survived it - although I think we all agree we are in a wildly different league than with Bush.  At least he has class.

Although portions of Plan B would probably not be the most enjoyable read for a conservative - Lamott pulls zero punches with how she feels - it's not all politically focused.  Again, it's mostly a spiritual memoir about her faith, and she also talks a lot about being a mother, a friend, coping with her contentious relationship with her mother and her mother's Alzheimer's, and surviving life's challenges and tragedies.

Much of her books are collections of essays that Lamott has written for publications like Salon.  Happily, I can share with you in entirety one of my favorite essays of hers that had the most resonance.  This sentence in particular struck a chord in my heart, "I felt addicted to the energy of scorning my president.  I thought that if people like me stopped hating him, it would mean that he had won."  And thus follows an essay about one of the single hardest challenges of my life - the notion of forgiveness.

Later, she goes on to say:


Driving home, I tried to hold on to what I'd heard that day: that loving your enemies was nonnegotiable.  It meant trying to respect them, it meant identifying with their humanity and weakness.  It didn't mean unconditional acceptance of their crazy behavior.  They were still accountable for the atrocities they'd perpetrated, as you were accountable for yours.  But you worked at doing better, at loving them, for the profoundest spiritual reason:  You were trying not to make things worse.

It touches on an element that I've struggled with a lot all election season.  To be passionate without going crazy.  To be informed without becoming obsessed.  To have some peace in your heart, even if the news makes you despair.  It's like the old quote, often attributed to the Buddha - "Holding on to anger is like grasping a hot coal with the intent of hurting another person - you are the one who gets burned."

The entire essay is really worth a read:  "Loving Bush, Day 2."  And just go ahead and order the book, which is seriously worth it:  Plan B:  Further Thoughts on Faith

Yesterday was exhilarating.  The women's march in literally all 7 continents did my heart so much good.  To feel so connected, to feel so one, with so many people was heartening.

But it hasn't fundamentally changed anything - not yet, at least.  The work that is yet to be done is less fun, and much harder.  We still have a President who sends his press secretary to dispute accurate reporting on the size of his inauguration crowd instead of actual life and death issues facing this country.  In attempting to protect his ego, he puts us all at risk.

Yet even though I'm not a Christian, and even though I am sure as hell not a Trump supporter, and even though I don't pray with much regularity or structure or faith that I'm actually being heard - I'm going to pray for this President.  I have never prayed regularly for a President before, not even Obama.  He did just fine without my help. 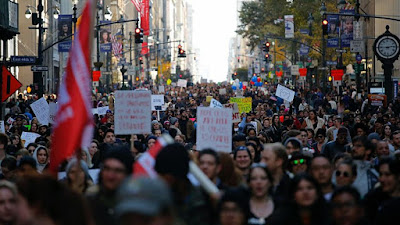