On August 16th, 2016, I went for a run after taking two weeks off, in hopes the pain in my left heel that had been plaguing me for months would heal itself.  The run was, as I remember and wrote in my journal later that day, amazing.  It felt so great to be back out, I pushed myself, I had new music (President Obama's Summer 2016 Spotify Playlist - sigh!), and I got good and sweaty.  The only downside to that amazing run was that right afterward, my foot pain increased a lot from where it had ever been before.

And of course, two days later at an appointment where I was hoping for a cortisone shot and to be sent on my merry running way, I discovered the pain was due to a torn plantar fascia and was sentenced to six weeks on crutches.  Which of course turned out to be longer than six weeks and would include a long recovery period which led to me not running again until February 5th, 2017.

That weekend of my injury I was supposed to run the France 8K, which would've been my second-to-last race to complete in order to guarantee entry into the 2017 Marathon.  Champagne, French stuff  everywhere, plus everything I love about a NYRR Central Park race.  I got the shirt and the bib (since I picked them up before my podiatrist) but alas, never got to earn them by running.

This past week I've been reflecting a lot at what I've learned about myself the last year, going from injury to recovery to running to the Brooklyn Half and then pulling back to shorter distances again.

I was already moving toward emphasizing cross and strength training before the injury, so I've continued to move hard in that direction, but much more importantly I've learned about forcing myself to stop when my body is giving me signals.  That it's okay to change your plan mid-run - or mid-whatever it is in life you're doing - when being obstinate and sticking to the plan just for the plan's sake would do more harm than good.

I finally ran that 8K this weekend, with my running wife and steadfast cheerleader by my side.  The weather was stunningly beautiful, we did a run/walk ratio of 5:1, and being on Whole30, I skipped the champagne (which wasn't even at the finish line!  We'd have go to hunting for it at the after party...) but I wouldn't have needed it anyway.  The satisfaction of conquering last year's race I was unable to run was more than enough for me.

It was also great running the 8K knowing I've got a plan in place for my next big running goal - running a 5K as fast as I can.  I've got my goal time set (more on that in a future entry!) and I have a training plan set to start on Sunday, September 3rd.

In the meantime, I've decided to take two self-imposed weeks off running.  No running at all until the start of my training period - I'll still work out hard and stay in good shape, but I can feel little twinges here and there in my body that are talking to me, and out of deference, respect, and an abundance of caution, I'm going to do the hard thing, the thing I don't want to do, and listen.  This time last year I wasn't running because I wasn't physically capable - this year, I'm choosing not to because I can feel my body asking me for a break.

I miss it already, but if there's one thing I learned from last year, it's the importance of listening to your body - and then giving it what it requires.  It's almost never easy and almost never in line with what your heart and brain want to do, but we only get one body in this lifetime, and the longer I live the more I learn how important it is to respect it.

Finally, in my Timehop last week, I came across an image that Laura sent me when she was giving me a pep talk when I was feeling down about my clipped wing.  She was a steadfast source of strength, and seeing this right before knowing we were going to run that race together gave me the biggest, most ridiculous smile.  It's a simple sentiment and absolutely true. 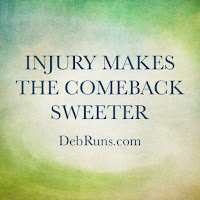