Oh how I've been putting off the next entry in my blog!!  I used to be so disciplined about getting in an entry a week, even if it wasn't much or just a link to someone else's ideas, but so much has happened in three (three!) short weeks that I feel overwhelmed with the sense of obligation to write about all of it.

First of all, I ran a marathon.  A marathon that I haven't really properly reflected upon, because I was in the midst of a whirlwind trip of amazing nonstop fun with my wonderful family, and one that I haven't properly processed because it's been bookended by injury - and more importantly, worry, anxiety, and self-pity around those injuries.

I was so resentful and scared to be going into it with a messed up hamstring (which, by the way, although it still felt painful the morning of the race, magically worked itself out during the first couple miles and went away!) that it eclipsed a lot of the excitement I would have otherwise felt.  I was definitely excited, but being afraid of not being able to even run a mile put a damper on it.

The race itself, physically, felt really rough.  Maybe it was because the crazy weather and the crazy hamstring took away my last week of training runs, who knows - but it was a lot more painful than any of my long training runs, and a lot earlier on too.  Well before the halfway mark I was feeling like getting under 5 hours wasn't going to be physically possible, which was disappointing - despite the fact that I should have just been focusing on finishing it at all and enjoying being there!  I lightened up a little in the second half, though sadly my knee and foot pain did not!

The race was like one long (5.34.39) conversation with myself.  I was surrounded by thousands of other runners and fun Disney characters and amazing volunteers and spectators and high school marching bands and great music, but as many runners who run without headphones will attest, there's nothing to do but talk to yourself and listen.  Mantras came up a lot - "Healthy and Strong" was a big one in the last 5 miles when everything hurt and felt anything but!  After listening to "Two Gomers Run For Their Lives," one of my favorite podcasts, I've adopted one of their sayings, which they adapted from a Bible quote - "Take your thoughts captive."  Anthony says that to himself (or is told by his wife!) when he knows his own worry or negative thoughts are getting in the way of his physical capabilities or his happiness.  It's right in line with this entry I wrote back in November, and was a huge guiding force in how I maintained positivity during the race.  And it really was fun!

It was very different from how I imagined it would be - from the beginning, this was all about doing it with my sister.  We've done every "first" race together - 5K, 10K, and half marathon.  Part of why we did Disney at all was because of how she fell in love with it while on her honeymoon there - she was so excited to go back and do a race Disney style!  It was incredibly hard for her to step back and decide not to run, but it was absolutely the right thing to do.  The most important thing is the health and safety of her and the two beautiful babies she's growing.  It's the first big race like that I've done without her by my side to keep constant conversation going - and to keep each other on pace!  But luckily - it's very easy to text during walk breaks!

I also had the most amazing support via text from her, my mom, my husband, and my friends (especially Lisa, who was literally praying for me during her church service while I was running!).  My mom and sister, of course, were there in person and able to cheer me on from Mile 5 and, most importantly, at the finish line.

Crossing the finish line was unbelievable.  I got to see my mom and sister in the stands and wave as I took the last several steps.  Mickey Mouse was right there waiting with a congratulatory high five, which was the coolest thing ever.  I was fighting tears almost the whole race, as is usually the case on a big race - there are so many incredible moments, so many heart-stirring signs of love and support from spectators, so many inspiring fellow runners.  Being Disney and being a full (and my first!) marathon made it ten times worse!  So much Disney music and Disney joy and childhood memories and constant messages of magic and perseverance - oh god, it's a miracle I wasn't crying the whole damn time.  Plus there were moments the pain in my knees made me want to cry for sure.

I nearly lost it when I saw that Mile 25 was bringing us through France in Epcot - my favorite (albeit fake) country!

I finally let it all go approaching and crossing the finish line.  It was amazing and unbelievable. 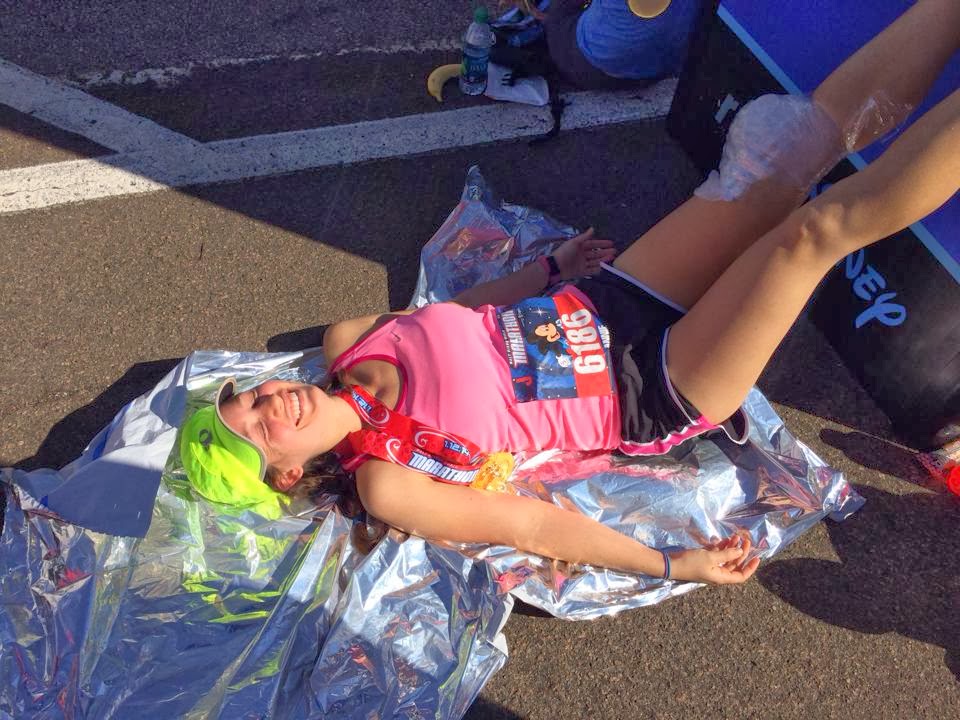 I unfortunately did sustain some kind of mystery injury in my left foot - either from the race itself or from foolishly walking around for the following week (between Epcot, Magic Kingdom, and going back to work & teaching), I've been crutch-bound for the past week and a half.  That's been its own marathon and its own teacher, but as I'm writing this, I realize I've been completely focused on the injuries and I haven't just let the marathon be.  I think this is enough for one entry.  More to come next week.

The only thing left to say is thank you to everyone who sent me any supportive words or thoughts at all throughout the whole process.  Having the friends, family, and support system I have is a blessing I don't take lightly and never want to take for granted.